About Lee Polevoi
Lee Polevoi’s short fiction has appeared in Witness, Sonora Review and elsewhere. He is a graduate of Amherst College and the Warren Wilson College MFA Program for Writers. He has received a Breadloaf Writers Conference scholarship and a $20,000 Chesterfield Writer’s Film Project screenwriting fellowship (based on chapters from his debut novel, The Moon in Deep Winter), an award sponsored by Universal Pictures and Amblin Entertainment, Steven Spielberg’s production company.  He was one of 10 writers chosen for the prestigious fellowship from a field of more than 3,000 applicants across the U.S.

An interview with Lee Polevoi

Q: The Moon in Deep Winter is described as being about a “homicidally dysfunctional family.” Are any parts of this debut novel of yours autobiographical?

A: As much as I might want to describe my parents and siblings as peculiar specimens of American Gothic, the truth is much more mundane. I grew up in the suburbs of Cleveland; my father held the same job throughout my childhood, providing ample middle-class food and shelter, while my mother became a small business owner, long before it was fashionable for women to do so. My brother and sister are blessedly normal. What happens to the family in the woods of New England bears no resemblance to anything or anyone in my immediate circle.

Q: When did you first start thinking of writing a novel?

A: I’ve been writing short fiction and novels fairly steadily throughout a variety of careers, certainly since working as a zookeeper at the Audubon Park Zoo in New Orleans many years ago. The pursuit has continued through temp office gigs and ever-higher levels of white-collar responsibility, which pay better than writing fiction, even if it’s not as much fun.

Q: Who are some of the writers who have influenced you?

A: The early and debut novels of Thomas McGuane and Thomas Berger sent me down the path of lyrical black comedy, while Don DeLillo’s novels taught me a lot about the precision of language. More recently I’ve been drawn to the works of Denis Johnson and Stephen Wright, outstanding novelists in terms of both vision and style. Lately John Banville’s novels, such as The Book of Evidence and The Untouchable, have widened the horizons of fiction for me.

Q: You worked on screenplays at Amblin Entertainment at Universal Studios, as part of a screenwriting fellowship offered by Steven Spielberg. What was that experience like?

A: A small group of fiction writers from around the country sat in studio conference rooms learning the fine art of pitching stories, and then writing scripts under a hard deadline. We were completely unfamiliar with the industry, so it was trial by fire, and few of us walked away without third-degree burns.

Q: What did you learn there that influenced your writing?

A: By adapting The Moon in Deep Winter as a screenplay, and later writing a script for hire based on Joseph Conrad’s Freya of the Seven Isles, I learned that the engine of the story must always be kept fueled. In successful screenplays, there is set-up, complication, climax and resolution—basic storytelling stuff bottled in three acts that brings the story home every time. For a certain kind of novel, and The Moon in Deep Winter I think is one of them, this type of propulsive narrative is absolutely right.

Q: What are you working on now?

A: An equally non-autobiographical novel set in New York City and a fictional Eastern European Communist state, circa 1982. There’s intrigue in the United Nations, a bungled transfer of cash in Central Park, an explosion or two on the Upper East Side. The working title is The Confessions of Gabriel Ash. Who knows? It might make a great movie. 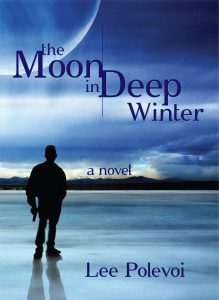 Book Description
When Parker Sloane returns from a dismal foray into third-world cash-smuggling to his childhood home in the woods of New England, it seems he’s seeing his
country and his blended stepfamily for the first time—and finding both just as twitchy, desperate, paranoid and unpredictable as the underworld types he thought he’d escaped.

Before he can even unpack, Parker goes head-to-head with his relatives—his tyrannical stepfather, seething younger brother, newly evangelical mother, and his alluring younger half-sister Rita—and with the demons they never exorcised.

Delicately but disastrously, Parker attempts to keep his family from imploding, unaware that they have their own plans for escape. The Moon in Deep Winter combines the dark comedy of the Coen brothers with the doomed lyricism of Denis Johnson, creating an airtight world of homicidal family dysfunction.